Turbocharger maximum efficiency can be achieved by very accurate coordination of turbocharger and diesel engine characteristics during the design and trial stage. This is a time consuming, complicated and expensive process.  Thus, engine manufacturers generally do not carry out this work in order to keep costs down. In most cases, the most suitable turbochargers available from the turbocharger manufacturer´s production lines are used.

With the trend of slow steaming in today’s market, main engines are operating between 75%-85% of MCR and auxiliary engines between 60%-75% of their maximum design loads and thus are not operating efficiently.

On a newbuild vessel, the specification is called for the main engine’s MCR (example 15,000 BHP). The engine manufacturer, together with the turbocharger maker supply the best suitable turbocharger available from the production line in order to achieve this MCR. Once the vessel has been delivered to the owner, the engine is usually operated around 75%-85% of it’s MCR. Thus, even at this point of time, the turbocharger already has room for improvement.

After vessel has been in service for some time, the main engine can not be operated at 75%-85% of it’s MCR, and in many cases 70%-75% of it’s MCR is achieved. This means that about 25% -30% of the engine’s exhaust gas energy is not utilized by the turbocharger and it’s efficiency significantly reduced. The turbocharger nozzle ring, which was designed for engine’s 100% output now is working at the engine’s output power of only 70% -75%.

Vicmar Engineering offers the procedure to increase turbocharger efficiency up to 100% while main end auxiliary engines are operating at their reduced operational loads. This technology has been developed by Dr Anatoly Mezheritsky (Ph.D., D.Sc. in Engineering) who has 50 years of diesel engine technology experience. This technology allows Vicmar to determine the optimum nozzle ring area, required for engine’s present operational profile. Once this is established and nozzle ring area is reduced the same amount of exhaust gases, which are produced by the engine at 70%-75% of it’s MCR are passing through the smaller nozzle ring area with a higher velocity. This increases the turbocharger RPM, the blower supplies the scavenging air into the cylinders at a higher pressure, the combustion process improves, which results in significant increases in fuel efficiency and savings.

The modification is done by reducing of the existing turbocharger nozzle ring area by blocking some of the nozzle ring wanes. This work can be done on board the vessel or in small machine shop, where a small milling machine is available. The modification for auxiliary engines can be carried out at any time during the vessels normal operation (one engine at the time), for main engine this modification can be done during vessels loading/unloading, during the time, when vessel is on anchor or in most of the cases during the dry dock period. This modification has been completed on over 200 vessels with all turbocharger makers. The reference letters under out “Testimonials” section attests to the effectiveness of this procedure 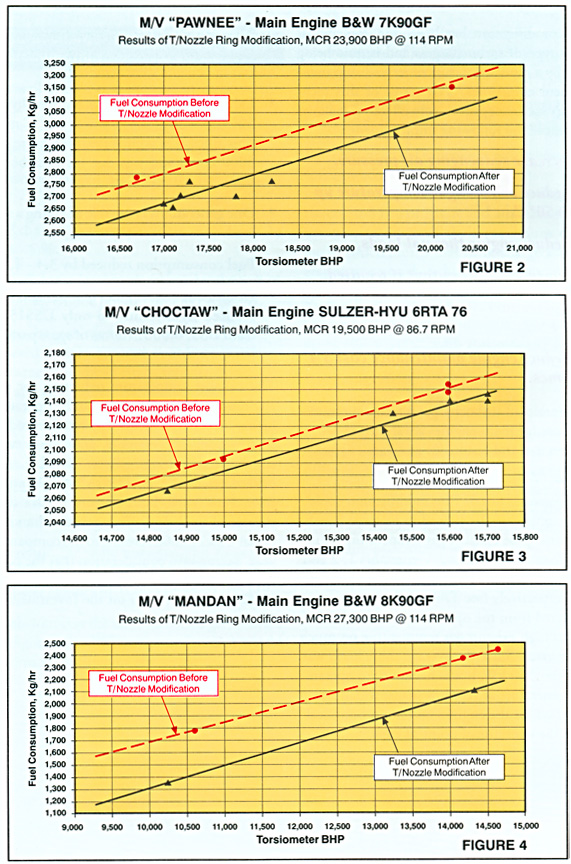